American Auto Racing: The Milestones and Personalities of a Century of Speed 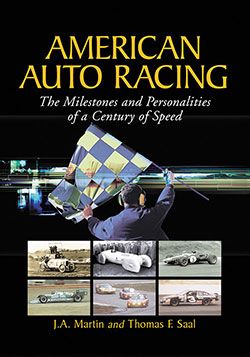 As soon as there were automobiles, there was racing. The first recorded race, an over road event from Paris to Rouen, France, was organized by the French newspaper Le Petit Journal in 1894. Seeing an opportunity for a similar event, Hermann H. Kohlsaat—publisher of the Chicago Times-Herald—sponsored what was hailed as the “Race of the Century,” a 54-mile race from Chicago’s Jackson Park to Evanston, Illinois, and back. Frank Duryea won in a time of 10 hours and 23 minutes, of which 7 hours and 53 minutes were actually spent on the road.
Race cars and competition have progressed continuously since that time, and today’s 200 mph races bear little resemblance to the event Duryea won. This work traces American auto racing through the 20th century, covering its significant milestones, developments and personalities. Subjects included are: Bill Elliott, dirt track racing, board track racing, Henry Ford, Grand Prix races, Dale Earnhardt, the Vanderbilt Cup, Bill France, Gordon Bennett, the Indianapolis Motor Speedway, the Mercer, the Stutz, Duesenberg, Frank Lockhart, drag racing, the Trans Am, Paul Newman, vintage racing, land speed records, Al Unser, Wilbur Shaw, the Corvette, the Cobra, Richard Petty, NASCAR, Can Am, Mickey Thompson, Roger Penske, Mario Andretti, Jeff Gordon, and Formula One. Through interviews with participants and track records, this text shows where, when and how racing changed. It describes the growth of each different form of auto racing as well as the people and technologies that made it ever faster.

J.A. Martin has written features on motorsports for several newspapers and lives in Baltimore.
Thomas F. Saal is a former editor of the newsletter for the Automotive Historical Society and lives in Lakewood, Ohio.