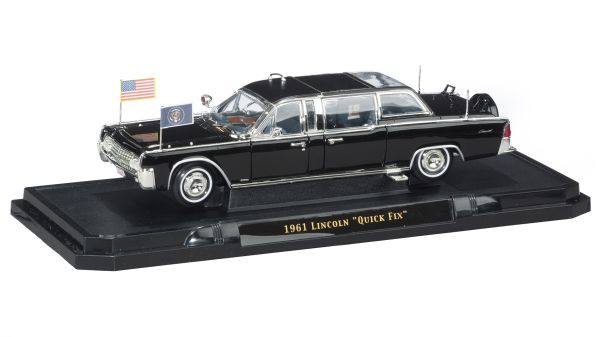 Skip to the beginning of the images gallery
$129.99
Out of stock

What ever happened to the 1961 limousine after the Kennedy assassination? This presidential vehicle earned the name "Quick Fix" because it was put back into service just five months after the Kennedy assassination. The "Quick Fix" was actually the Lincoln X-100 - the same car President John F. Kennedy had been riding in the day he was shot. What began as a stock 1961 Lincoln 4-door convertible was converted into a parade vehicle. It had no armor plating or bullet-resistant glass (in order to allow the president more visibility) and was featureless to keep him dry in bad weather. Immediately following the assassination, the government decided as a cost savings to rebuild the limousine rather than order another. New modifications protected passengers with the addition of bullet-proof glass. The large glass panel directly above the rear seat weighed 1500 pounds and in 1964 was the largest piece of curved glass ever made. Renovations included a new engine, titanium armor plating, an updated 1964 grille, and was repainted in midnight blue then returned to the White House in May 1964. At the urging of the new President, Lyndon Baines Johnson, the car was repainted black to reduce the stigma that he was riding in a death car. The limousine remained in service for Presidents Johnson, Nixon, Ford and Carter before being retired in 1977. Find all the critical details in this fantastic 1/24 scale model. The original vehicle can be seen at the Henry Ford Museum in Dearborn, Michigan.